The AJP is the only political party with policies that comprehensively take into account all sources of emissions, including the impact of animal agriculture and land clearing on the global climate, and the need to urgently transition to a plant-based diet in order to address the climate crisis.

The Animal Justice Party (AJP) will take urgent action to address the climate emergency. In addition to phasing out fossil fuels, we will transition from animal agriculture towards more sustainable plant-based farming, and transform other climate threatening industries and practices. This is essential not only to reduce harmful emissions, but also to protect nature, and human and other animal life.

The climate emergency is a planetary crisis requiring immediate and substantial action. It is caused by increased greenhouse gases in the atmosphere that cause the Earth's temperature to rise, i.e., global heating. Moreover, global heating creates feedback loops, causing more carbon dioxide to be released, for example, through the thawing of permafrost. Human activity drives the increases in greenhouse gas emission, e.g., land clearing, animal agriculture and fossil fuel use, but also transport, and building and construction. Carbon dioxide is not the only greenhouse gas; methane, nitrous oxide and various fluorine gases are also contributors.

Humans and other animals are already suffering from the impacts of the climate emergency. This emergency is driving species extinction, changes in weather and climatic extremes, changes in precipitation patterns and soil moisture, our ability to grow food, availability of and access to freshwater, and more. In Australia, for example, the climate emergency has already significantly impacted our water security. Entire social and technological systems will also feel the impact, such as our health systems and energy systems.

Even when we stop emitting greenhouse gases, heating will continue for some decades. There is evidence that tipping points are near. Ultimately, the climate emergency is as much a threat to nature and our biological systems as it is a threat to our social and political systems worldwide.

The imperative is for urgent action now to protect what we can, stop the emission of greenhouse gases, and accelerate ecological regeneration for climate protection.

The brunt of the climate emergency will be borne disproportionately by socially and economically disadvantaged groups such as women and children, First Nations Peoples, younger generations and non-human animals. This is felt between and within nations, leading to ever greater inequalities. The AJP supports measures to alleviate these environmental and climate injustices.

With the growing number of climate refugees, the AJP will help Australia to fulfil its role as a good global citizen for those in need (see our Asylum Seeker Position). Many are already affected by the climate emergency in Australia and overseas, and we support speedy and effective measures for those suffering hardship.

To address the problem, we must offer support to people and businesses that want to transition away from exploiting animals and the environment, in particular those with significant climate footprints. Our Ethical Economy Policy calls for a transition to kind and meaningful employment for all Australians.

Climate justice must include all species. AJP supports the reservation of at least 50% of the planet for nature (see our Human Population Policy), and calls for the regeneration of the natural world and adaptation strategies to assist animals facing a changing climate. Ultimately, this will create a more resilient and healthier world for all of us.

Regeneration and Protection of Nature

Our survival and the survival of other species depends on a healthy environment. However, major crises are threatening life on Earth: the climate emergency, biodiversity emergency, and emerging diseases. These crises are connected. An important part of the solution is the protection and regeneration of nature, enabled by a shift to a plant-based diet (see below in the Animal Agriculture section). Our vision includes natural and assisted regeneration, such as rewilding current agricultural lands, planting trees, improving biodiversity in parks and cities, and rehabilitating former mining sites, other land and waterways.

The United Nations Global Biodiversity Outlook 5 identifies eight critical transitions that are required to shift to a "sustainable coexistence with nature". One transition is focused on the climate emergency, while agriculture is directly or indirectly implicated in most of these transitions. That is why AJP specifically focuses on animal agriculture in this policy.

Animal agriculture is a major contributor to the climate crisis, and yet, it is too often overlooked or ignored by climate advocates and major political parties. In Australia, agriculture contributes around 13% of our greenhouse gas emissions each year without considering the effects of land-clearing. However, that 13% is misleading: methane emitted by animal agriculture has a much greater heating effect than the carbon dioxide emitted from burning fossil fuels.

The following chart, using Australia’s 2021 UN Inventory data, shows that methane emissions from Australia's 28 million cows and 70 million sheep will have more impact on the climate in the next 20 years (GWP20) than all of our coal or gas-fired electricity power stations combined (Figure 1). 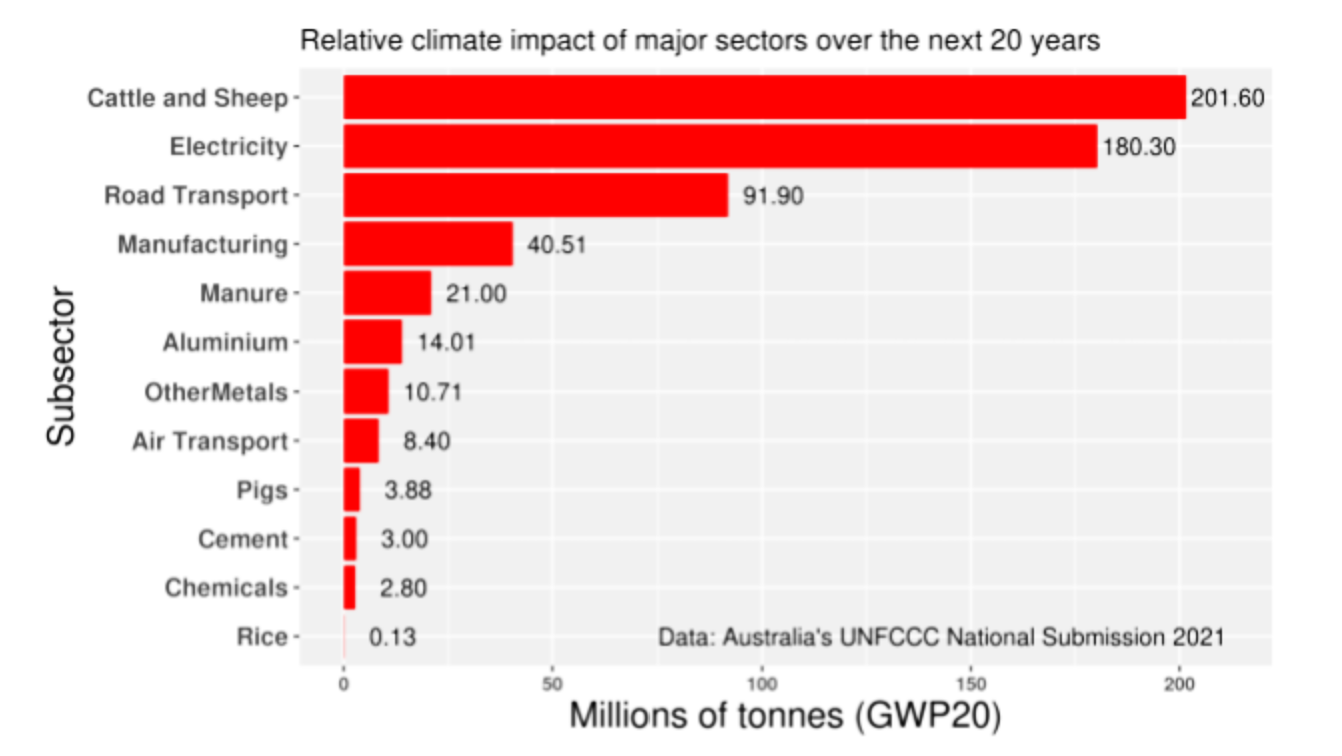 If global trends in meat and dairy intake continue, global mean temperature rise will more than likely exceed 2 degrees Celsius, even with an instantaneous cessation of fossil fuel use. Climate solutions must tackle both carbon dioxide and methane levels simultaneously.

For a truly sustainable, equitable and food-secure future, global organisations are now calling on governments to commit to a reduction in or moratoriums on animal agriculture and positive support for plant-based diets, including

This transition will invariably require government support to assist businesses and workers currently working in animal agriculture to re-train and transition into more sustainable and humane plant-based industries, including emerging industries in plant-based alternatives (e.g., alternative milks and proteins), as well as cell-based meats. These types of TransFARMation projects are already taking place successfully around the world. Major meat producers are adopting plant-based products in an effort to meet consumer demand and protect their bottom line.

Australian governments, other Australian political parties and the animal agriculture industry fail to recognise animal agriculture as part of the problem. They propose ineffective responses to this problem. For example, feeding cows red seaweed makes headlines but only covers 10% of their lifetime emissions, has serious animal welfare implications, is impractical to scale commercially, and fails to address land clearing.

New homes in Australia are among the largest in the world; particularly free-standing houses. Large houses use more materials to build and furnish, and more energy to run. All material goods begin either as the output of mines, forests, cropping, or animal agriculture. Housing materials and contents frequently generate emissions not just via energy used in mining and processing, but also via the chemistry of manufacture. Cement, for example, not only uses prodigious amounts of energy during production, but the process itself generates carbon dioxide. Global cement production is about 4.4 billion tonnes per year; generating about 2.6 billion tonnes of carbon dioxide. We desperately need a climate-friendly alternative.

It is not just the homes and buildings we need to change, but the cities and townscapes around them. Cities are major sources of emissions. We must mitigate climate change by stopping urban sprawl and developing walkable cities (see our Human Population & Planning and Land Transport Policies). Australia must also adapt to climate change by welcoming nature back into our suburbs (see our Urban Animals Policy) and making our towns and cities cooler with better designs, less concrete and more green spaces. Implementing biodiversity-sensitive urban design (BSUD) creates settlements that support the local ecosystem rather than replace it. It is positive all round: cities are cooler and emit less, people are happier and more active, and species become more resilient to a changing climate and landscape.

The AJP wants to see Australia’s emissions plummet but cautions against interim measures which may risk entrenching the fossil fuel and animal agriculture industries. For example, switching from coal to gas and offshoring emission intensive industries has provided short-term ‘good news’ for domestic audiences but may do more harm than good in the long run. Targets in the fossil fuel industry must mean transitioning to clean energy; not investing in trying to make fossil fuels ‘cleaner’. Likewise, targets in animal agriculture must mean transitioning towards sustainable plant-based agriculture; not ‘greenwashing’ suggestions like feeding cows seaweed (see above).